Eerie and Off the Beaten Path

Rusty factories, creepy abandoned hospitals, eerie bunkers or post-apocalyptic places of pollution. Are these the kind of places you are searching for? Bratislava has it all. But hurry up, the city is developing rapidly. Let’s dive into the best spots suitable for urban exploration in Bratislava. 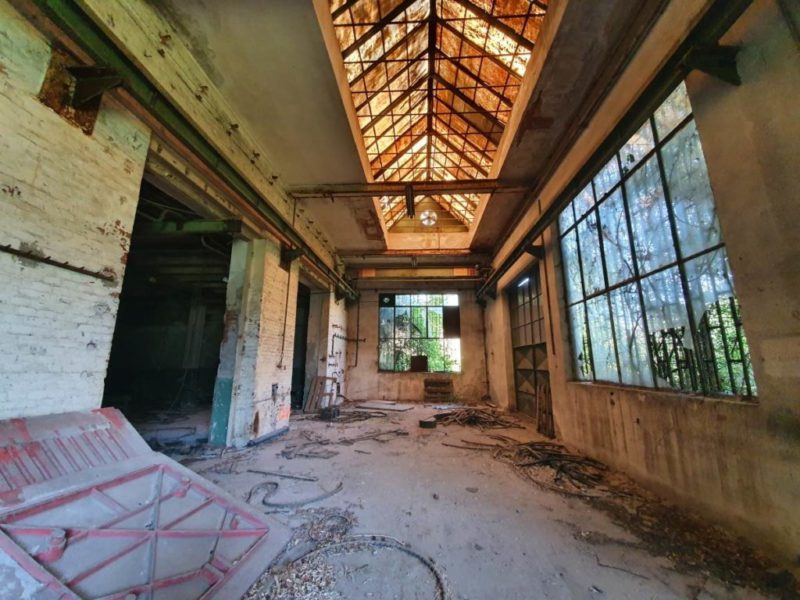 Since the end of the 19th century, especially the eastern and the north-eastern parts of Bratislava were important for industrial production. Once a medieval fishing town and later the capital and coronation city of the Hungarian Kingdom, it suddenly changed its silhouette and the number of chimneys soon exceeded the number of church towers. Read more in the great article “Bratislava Goes Post-Industrial”, written by our colleague Juro.

Bratislava has lost many urbex spots due to the redevelopment of its suburban zones. In some cases there was not so much to preserve, but in other cases, valuable industrial architecture and design was destroyed.

The list of disappeared industrial objects includes several factories in the new Bratislava’s Manhattan neighbourhood at Mlynské nivy. These were: Gumon (chemical factory producing bakelite), Klingerka (textile factory processing jute), a part of Cvernovka (textile factory producing thread) and a part of Apollo (petroleum factory). The whole neighbourhood is being redeveloped and it should become a new modern downtown of Bratislava.

Still a cool place to go for urbex nearby, is the so-called Winter Harbour with its industrial riverside feel. Access is regulated, but you can try to enter from the Eurovea shopping mall next to Huma-8 pier. Exploring the artificial peninsulas, bays, faded buildings and rusty boats is a special experience. It used to be one of the largest river harbours in Central Europe with its best times in the interwar period. The most valuable piece to find is the tow boat Šturec, the last of its kind in Slovakia.

One of the best, but also the most challenging places for urbex in Bratislava is the former chemical factory Istrochem, formerly known also as a Nobel Dynamite and Dimitrov plant. A huge area of 120 hectares is partially still used by several small companies, but the large part of it is deserted and polluted ground with several interesting objects to explore.

The whole area is fenced and guarded, access is illegal and completely on your own responsibility. It is interesting that Istrochem is owned by Agrofert corporation, which is in the hands of Mr. Andrej Babiš, the today’s Czech prime minister. Abandoned factory buildings, former rails, polluted ponds and wild Chernobyl-like greenery make this spot really adventurous.

Another urbex spot hidden in the greenery is the abandoned military base at Devínska Kobyla. This former Czechoslovak army base was built during the late Cold War in the 1980’s to protect Bratislava from the imperialist evils always ready to invade the socialist block from the West. Access is legal and on the hilltop there is a new observation tower built in 2020. There are several massive concrete objects that were used to store anti craft missiles of the Czechoslovak army.

The headquarters building has several floors with abandoned rooms worth taking a look at. To get there, walk up from Dúbravská hlavica. Alternatively, take a red trail from Devín with a steep 1-hour walk, or a green trail from Devínska Nová Ves. If you feel like having a guided tour here, come with us for the Devín Castle Tour extended by the Army Base Hike experience (6 hours in total).

Petržalka is the largest communist-era neighbourhood in former Czechoslovakia, located on the other side of the Danube river in Bratislava. Besides the numerous concrete prefabricated housing estates, it also hides an interesting post-industrial complex in transition worth exploring.

Not far from the Petržalka train station, you can still find several objects of the former tyre factory Matador and the Enamel plant. The former enamel and metal product factory building was formerly a part of Matador. It has a very interesting design and houses various companies nowadays.

At the southern end of Petržalka, there used to be one of the creepiest urbex places in Bratislava. An abandoned metro depot was a huge concrete monster with the 300 metres long unfinished tunnel. Flying pigeons, thematic graffiti and monumental street art at the end of the object, all this made a visit to the metro depot a real adventure.

It is a post-apocalyptic monument to the desires of the communist-era planners to build an underground transport system for Bratislava in the 1970’s and 1980’s. The project was stopped after the 1989 Velvet Revolution due to lack of finances. This spot was destroyed due to development of residential objects in 2022.

If you are a fan of the military objects, definitely visit at least one of the war bunkers in Petržalka. They define a line starting from the Danube river bank westards from the Lafranconi bridge (bunker BS-1) further south (bunkers BS-4, BS-6 and BS-8 are the museums you can visit depending on their opening times) and then eastwards again to the Danube river bank opposite the Slovnaft oil refinery. The easiest access is to the BS-1 (best to visit by bicycle) and BS-13 bunkers. Bunkers were built by the Czechoslovak army as a reaction to the rise of Adolf Hitler’s regime in the late 1930’s.

Do you wish to have explore some of the urbex sites with a guide? Come with us for the Post-Communist Bratislava Tour extended by the Urban Explorer experience. This is a 4-hour adventure with a Škoda car where do you do not have to be afraid of being caught. ?