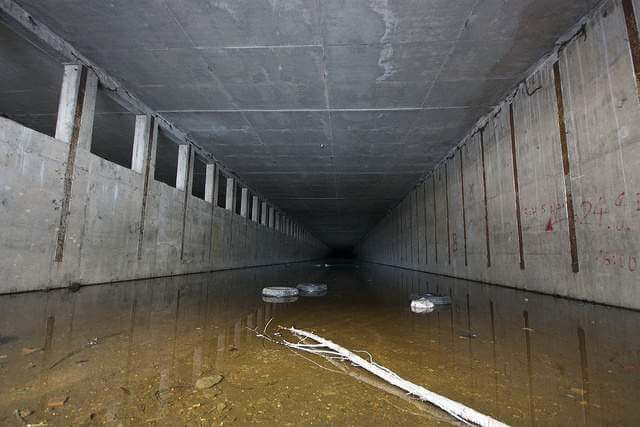 This is really spooky! “Concreted hole for a big monster. Water, dirt, darkness and a perfect echo. Enter only in fishing trousers, gumboots and with a torch. Ideal spot for shooting rap videoclips.” Really, endless tunnell filled with water and darkness creates fear and fascination for anyone who dares to get closer.

In 1974, when Petržalka as one of the largest socialist housing projects in Europe was blossoming, decision to create an underground transport system in Bratislava was made. Metro started to be built in 1988 by the terminus at Lúky juh area.

As “metro” was allowed only for capital city and cities over 1 million according to Soviet standards, offical name of this transport system was “fast train”, something like S-Bahn. The plan was to finish the first phase until 1997. Five billion Czechoslovak crowns (Kčs) were allocated, only 400 million spent.

After the fall of communist regime, in 1990 construction stopped. Project was originally built on Soviet technology and now, new possibilites from the West could be implemented. But construction never continued.

The only remnant lies like a sleepy monster at the end of Petržalka district. In case of interest, we visit this place during our Post Socialist City Tour. Image provided by “happy explorer” from USA, our (hopefully) happy client.

This website uses cookies to improve your experience while you navigate through the website. Out of these cookies, the cookies that are categorized as necessary are stored on your browser as they are essential for the working of basic functionalities of the website. We also use third-party cookies that help us analyze and understand how you use this website. These cookies will be stored in your browser only with your consent. You also have the option to opt-out of these cookies. But opting out of some of these cookies may have an effect on your browsing experience.
Necessary Always Enabled
Necessary cookies are absolutely essential for the website to function properly. This category only includes cookies that ensures basic functionalities and security features of the website. These cookies do not store any personal information.
Non-necessary
Any cookies that may not be particularly necessary for the website to function and is used specifically to collect user personal data via analytics, ads, other embedded contents are termed as non-necessary cookies. It is mandatory to procure user consent prior to running these cookies on your website.
SAVE & ACCEPT