Welcome to the capital of Slovakia - Bratislava. The city of contrasts where each generation of its inhabitants left a very distinct mark defining this city today. Lets take a look at some of the most amazing landmarks connected to the communist era, 1948 - 1989. 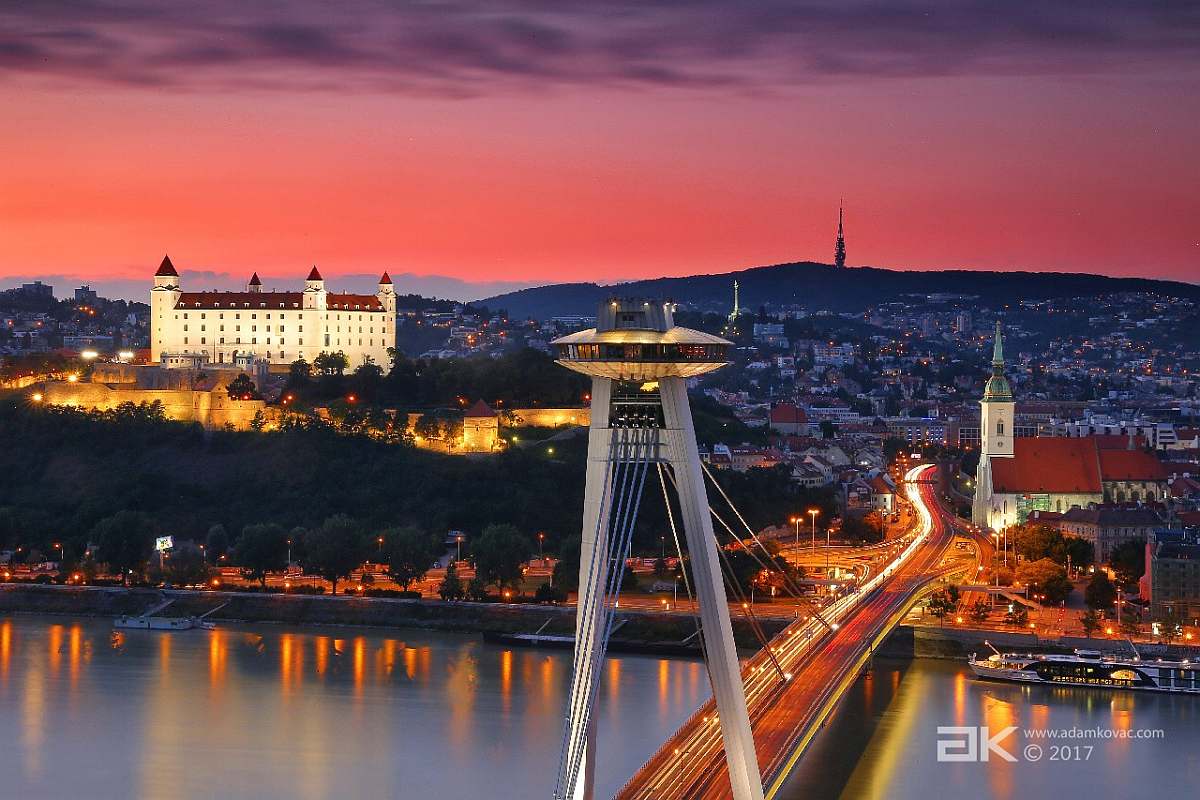 For those arriving from the west through our neighbouring city Vienna for centuries the most obvious sign of Bratislava has been the Bratislava Castle. Fortress in the shape of a reversed table with its four legs pointing to the sky. The early history of Bratislava castle dates back to the time of the celts during the late Iron age in the 2nd century BC. A couple of years later during WW2 we have almost lost this ancient historical landmark however not due to bombing but as a result of a very ambitious planning. During the existence of the First Slovak Republic allied with Nazi Germany the idea was to knock down the castle and build a student campus instead of it. Such planning reflected the spirit of writing of the new pure Slovak history. With a bit of luck and WW2 ending the Castle was saved when a full reconstruction was finished in 1968.

The second half of the 20th century in other words the era of communism resulted in dramatic changes in the panorama of Bratislava yielding the modern landmarks of the city. 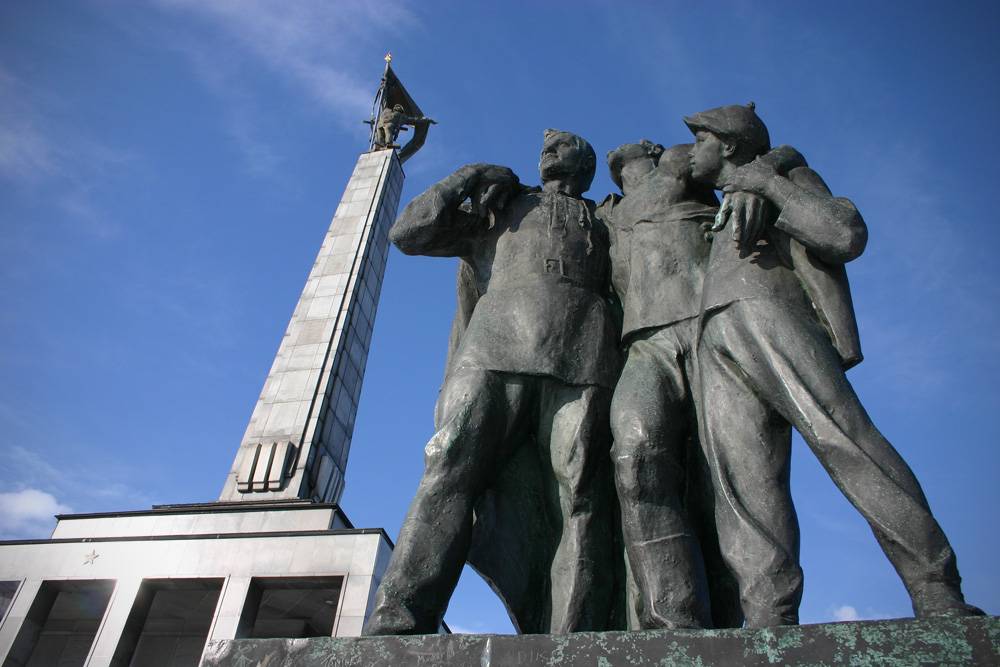 Chronologically we can start with the Slavín Memorial. The name is derived from the Slovak word „sláva“, meaning glory and the purpose of this Soviet memorial is the glorification of the Red Army and the liberation of Bratislava from the Nazi occupation on the 4th of April 1945. It is a 40 meters tall memorial with a 7 meters high statue of Soviet soldier proudly crushing a swastika. Great symbol of victory as it may also be a symbol of Soviet dominance over the Czechoslovak Socialist Republic. The memorial was unveiled in 1960 after 3 years of construction. These days like many Soviet memorials in Eastern Europe it is a popular skate park because of its high quality surface from polished granite. In the evening it also becomes a popular dating place of young couples but many of them might not know that they are surrounded by almost 7000 graves of Soviet soldiers.

Slavín was build as a purely secular site without any religious symbols. A tower of a nearby church had to be demolished quickly before the opening day. Since 1997 there is also a small and very modest memorial to Alexander Dubček on Slavín. It is called the Meadow of peace representing the principles of humanity that were fundamental for  Dubček’s political program of 1968 - Socialism with human face crushed on the 21st of August 1968 by the Soviet invasion into Czechoslovakia. Later referred to as the act of friendly help. 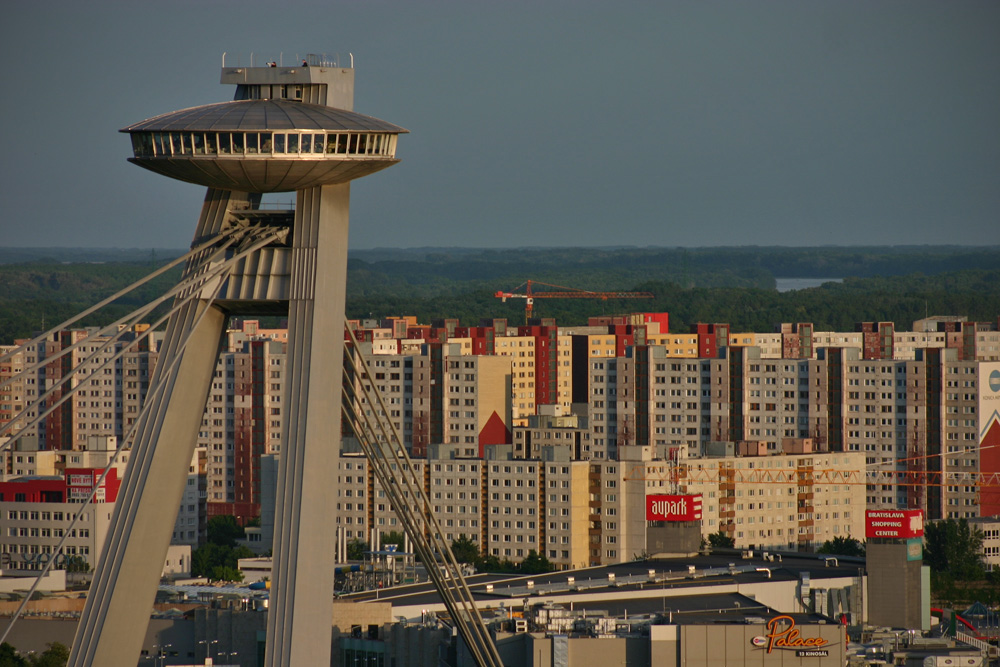 Looking the direction south from the terraces of Slavín one will spot a very peculiar landmark. Since 1972 a flying saucer has been hovering above the city perhaps controlling the minds of people. Of course we are speaking about the SNP Bridge with a UFO-like restaurant at the top crowned by a viewing platform. Absolutely the best thing about this restaurant is the unforgettable view from the toilets overlooking the biggest socialist mass housing project in Central Europe - Petržalka. Undoubtedly the UFO bridge became known as the symbol of modern Bratislava immediately after its construction. However, there are still many among us who have the vivid memories of big portion of the Old town that had to be demolished prior to the construction in order to make room for the largest civil engineering project of the fast growing modern city.

The urban planning of Petržalka was finished but there was no sufficient connection with the rest of the city. Decisions were taken quickly without respect to the history and public opinion. About one fifth of the Old town and the entire Jewish quartier including a beautiful oriental synagogue were demolished. From the technical point of view it is a very unique solution using the technology of a cable-stayed bridge with a very long span without a single pillar in the river. The span was even longer but due to an error in calculations a special metal support had to be built additionally on the left bank. 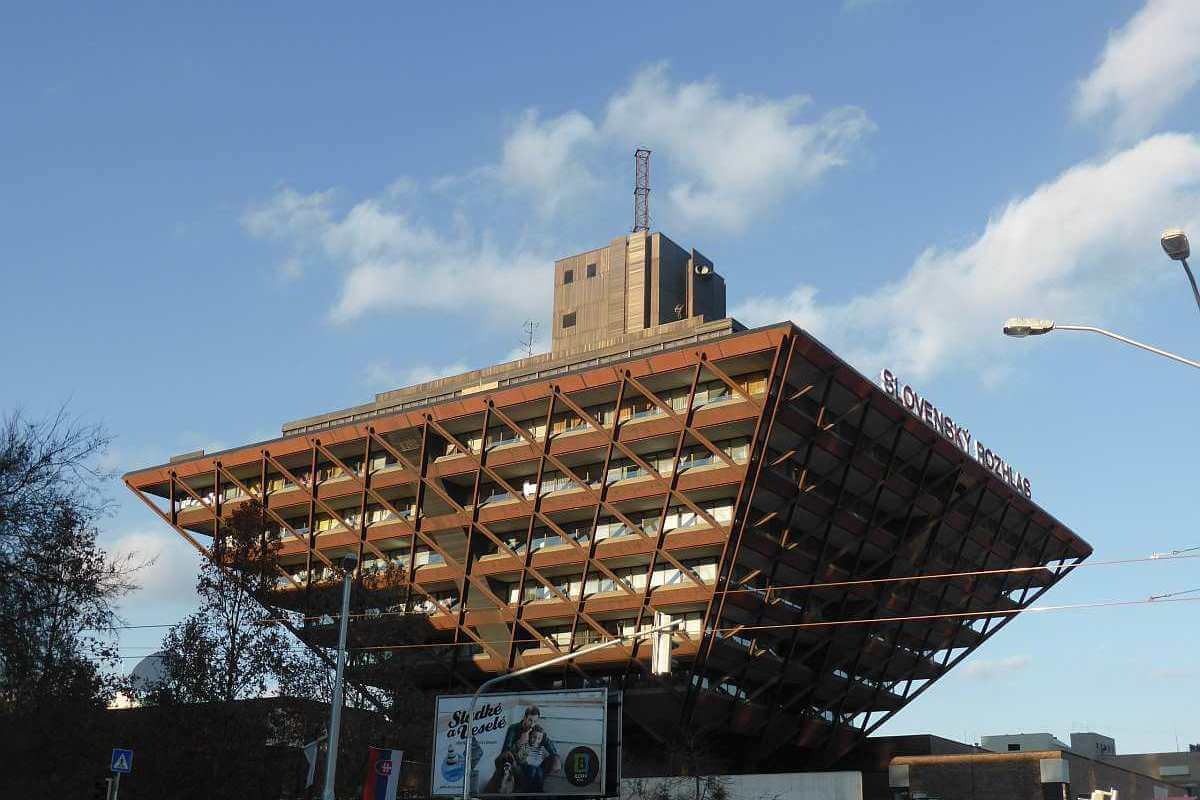 In Bratislava we like to put things upside down so we even did it with our only pyramid. Not an ancient pyramid, however for us one of the most important landmarks of this city, the Slovak Radio Building. For us the building of the century, for the Telegraph one of the 30 ugliest buildings in the world. When the first sketches of the project appeared they were immediately recognized as very ambitious, breaking all previous conventions and even the laws of physics - how can you possibly invert a pyramid and build it on its tip? Later this innovative idea of the main architect Štefan Svetko proved to be very functional. The heart of the radio which is the recording and broadcasting equipment is hidden in the inner pyramid insulated from the outer world by the office space.

Due to many technical difficulties the construction of the radio took 16 years to finish. The second part of the building includes a unique concert hall with top notch acoustics. It fact it is a clever design of building hanging on steel ropes inside of another building in order to achieve absolute sound insulation. This concert hall is home of Symphonic Orchestra of the Slovak Radio, has one of the biggest organs in Slovakia and is a popular place for soundtrack recordings. The building definitely deserves the attention of visitors or join the guided tour organized by the Faculty of Architecture called Why Pyramid? 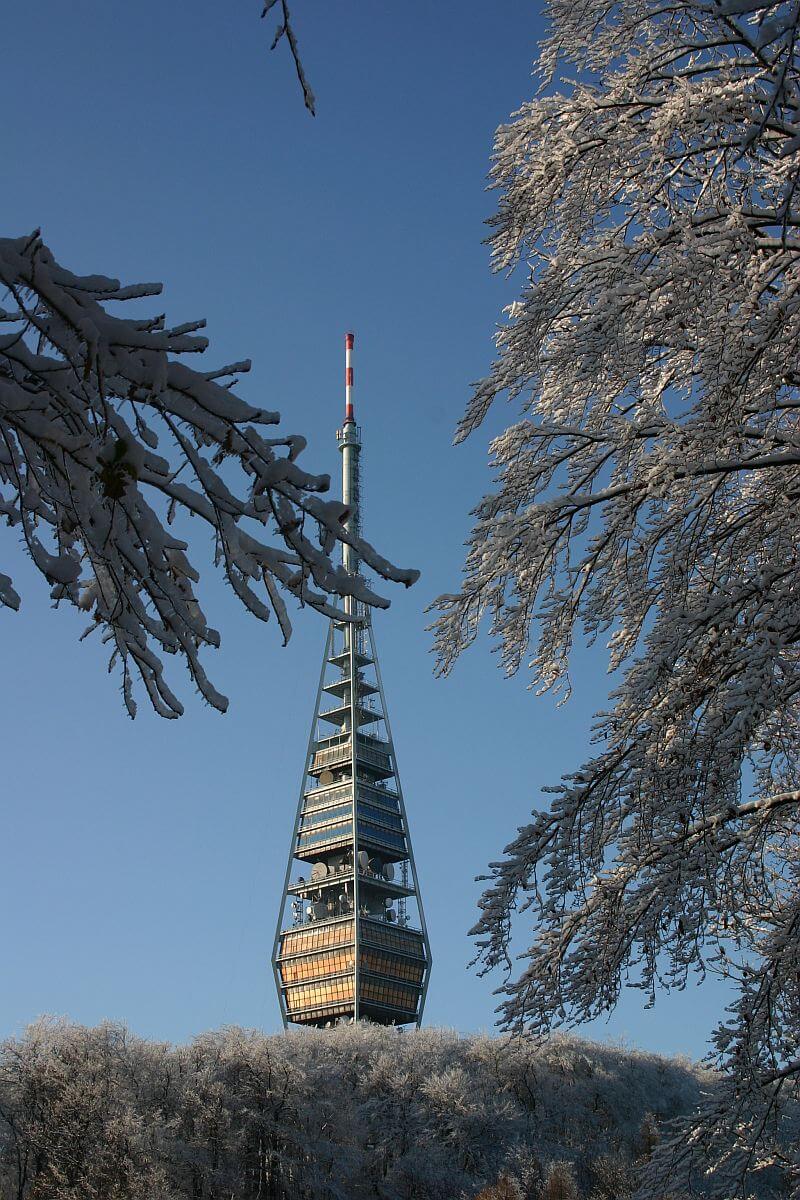 Speaking about landmarks we can not forget height. So what is the tallest building in Bratislava? This depends on the definition of a building. If we include TV Towers with restaurants than it is Kamzik TV Tower with its 196 meters and the shape like wine bottle. At least this is what the architect intended in order to remind us of the wine production on the nearby slopes. However more people incline to the theory that it reminds us of a rocket ready to be launched in the space. Since 1975 the TV Tower sets a landmark not only to Bratislava but also to the beginning of an important European geological formation, the Carpathian Mountains.

If one wants to understand the geography of Bratislava this is the best place. The restaurant offers a gorgeous view in all directions. It is easy to recognize Vienna and during the days with very clear air also the first hills of Austrian Alps covered with snow - in times of socialism for most ordinary people just a distant dream. Our TV Tower was designed in the time when construction of new highest landmarks was a trend and well known world metropoles like Berlin, Vienna or Moscow did the same thing and we wanted to approach them.

All of the above mentioned landmarks are nowadays partially forming the identity of Bratislava and are worth preserving. Each of them with its historical background is a witness of social and political changes and a mirror of our changing society in the second half of the 20th century and each of them dramatically changed the appearance of this city for many years in the future.